I have this moss terrarium that is not doing that well.  It’s never done well.  I guess moss doesn’t really want to live in a jar.  Probably more than a year ago, I dropped a maidenhair fern frond in there that was loaded with spores.  I thought it might sprout, but after the leaf decayed, nothing happened so I forgot about it… not that I really knew what fern sprouts looked like.  Months ago, I started seeing this strange structure growing out of my dying moss clumps.  It kind of looks like tiny kelp.  I thought maybe it was a liverwort or some moss structure that grows from moss in some last attempt to live.  My “moss kelp” eventually grew some branches, so I thought it was making spores. 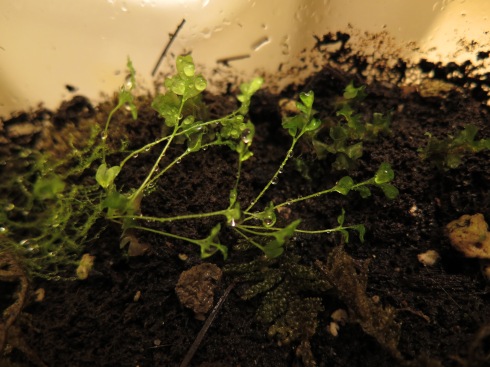 From left to right: some scraggly moss, young maidenhair ferns, and the fern prothallia

Fast forward to today.  My maidenhair fern in my office (a division of the one mentioned earlier) is dropping spores all over the window sill, so I did some internet research on how to grow ferns from spores.  That’s when I discovered I’ve actually already done it.  The “moss kelp” is the prothallium or the gametophyte of the fern (the structure where fertilization happens).  From the prothallium, the fern that we recognize grows.  Now I wonder if I can do it again on purpose.

A note on the photograph: photographing prothallia is really difficult.  I was frustrated at the lack of good photos online, but now I understand, so please excuse my lack of detail in my photo.  I may try to get some better macro photos later.

I lead two lives - one as an artist and the other as a scientist. More and more I'm finding my two worlds colliding, and it's not the disaster you might expect. END_OF_DOCUMENT_TOKEN_TO_BE_REPLACED
This entry was posted on Thursday, January 7th, 2016 at 7:33 pm and tagged with DIY, ferns, Gardening, Plants, Science and posted in DIY, Gardening, Science, Uncategorized. You can follow any responses to this entry through the RSS 2.0 feed.
« ArcGIS Tabulate Area Error
My Big Day of Giving Toolbox »

I'd love to hear what you think. Leave a comment! Cancel reply