When I get a new phone, it feels a lot like getting a new pet.  You can’t just get the pet, it needs accessories and things to make it comfortable in it’s new life.  Granted, most phones don’t require as much stuff as, say, a puppy, but still.  I think you know what I mean.  My last phone was dying a slow death mostly because of cheap internal parts, but also because my keys kept scratching against it.  To keep the new phone in better condition, I made it this quick little felt phone cover and decorated it with yarn embroidery.

You can see, it’s pretty simple: I just cut two pieces of scrap felt wide enough to enclose the phone.  For the length, the top piece (that has the flowers) is almost as tall as the phone.  The bottom piece is long enough to cover the whole back, plus wrap over the top to form the flap.  Then I made a little stitch doodle with some yarn I had laying around (using this oddly sharp darning needle I happen to have but have no idea where it came from).  Next, I just hand stitched the two pieces together.  I didn’t want to get out the whole sewing machine for a 10 minute job.  Finally, I put a snap on it because I figured it would be quicker to open, but a button or velcro would probably also work.  Be careful if you choose velcro to close felt – the raspy side will stick to and shred any felt it gets a hold of, including parts of your phone case. 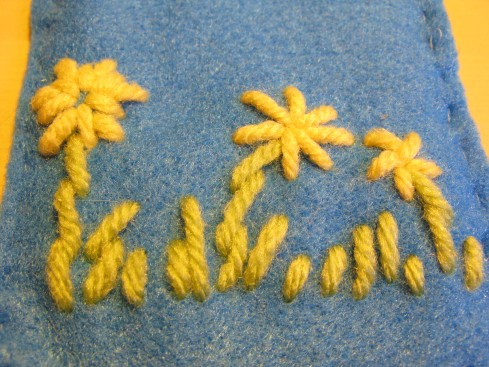 I lead two lives - one as an artist and the other as a scientist. More and more I'm finding my two worlds colliding, and it's not the disaster you might expect. END_OF_DOCUMENT_TOKEN_TO_BE_REPLACED
This entry was posted on Saturday, January 7th, 2012 at 2:06 pm and tagged with Art, DIY, Sewing and posted in Art, DIY, Sewing. You can follow any responses to this entry through the RSS 2.0 feed.
« Peace Sign Wreath
DIY Terrarium »

I'd love to hear what you think. Leave a comment! Cancel reply